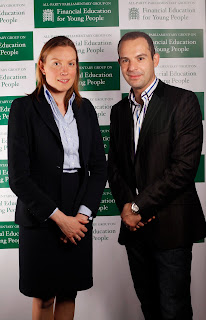 On Monday, I attended the launch of the All Party Parliamentary Group (APPG) on Financial Education for Young People as part of a major campaign for compulsory financial education in schools. Over 170 MPs from all parties have joined the group, making it one of the largest APPGs ever.

Formed on the back of a debt-ridden financial crisis and an increasingly complex financial world, the group is calling is for compulsory financial education in schools, ensuring young people understand money, consuming and debt. It's set to be the new force behind pushing financial education up the agenda, and co-ordinating the agencies already working towards it, including charity pfeg and moneysavingexpert.com.

I think it is vital that we equip the next generation with the understanding to be able to make informed financial decisions. I am pleased to be a member of this group, and hope that through working together we will be able to help young people better understand the difficult choices that they will need to make.

The Launch was attended by Martin Lewis, creator of MoneySavingExpert.com. Martin is a great champion for the cause. Martin hit the nail on the head when he said "What's been deeply frustrating campaigning on this over the years is while virtually everybody agrees it's needed and people often say 'I wish I'd had it', making it happen is a nightmare. That's why this co-ordinated effort is so exciting. After all, as a financially illiterate nation, it's not enough to rely on parents to teach financial education. Schools are the key to breaking the debt cycle leading to less mis-selling, fewer bad debts, better consumers and could save the public purse a fortune. It's a national disgrace that in the 20 years since student loans were launched we've educated our youth into debt, but never about debt. Now as tuition fees are getting bigger we simply cannot leave young people uneducated on this matter."
Posted by Tracey Crouch at 10:12