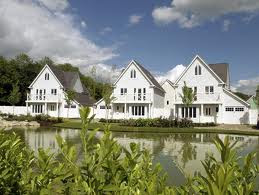 Last night I chaired a public meeting for residents of Holborough Lakes with the Manging Director of Berkeley Homes, the development company behind the estate. Interestingly, the vast majority of people I've spoken to who live on the estate love their property and are very happy with the building spec. Unfortunately their frustration has always been around parking problems borne out of Prescott's ludicrous planning requirements. As the development has continued the developers have amended their plans but residents who bought in the first two phases continue to suffer from lack of parking space.

The key issues raised during the evening included the prohibition of commercial vans parking on the estate, the use of and charging for visitor spaces, plans to increase the number of parking areas, speeding through the estate and the improvement of play areas.
Berkeley Homes came to the meeting having listened to complaints raised by me and residents direct and had some proposals for discussion. Some were received well, others will be reconsidered further, plus there were some very good new proposals put forward by residents during the meeting which will also be taken back and discussed further. All in all I thought the meeting was extremely constructive and whilst the concerns of residents are not yet dealt with, there has at least now been some dialogue and indeed a bit of progress.
Posted by Tracey Crouch at 09:16 No comments: It was a real privilege this evening to sit on a top table at the Civic Reception held in honour of HMS Chatham's visit to Chatham Maritime. I felt a real sense of pride in those I talked to this evening about their time on board a ship that is the latest in a long line of those to carry Chatham's name, and their sense of duty to Queen and Country is palpable. I was on a table with two women, both Able Seaman, and two Officers and the team work and family spirit of those who serve on board was evident, whilst still showing utter respect for rank. They were a credit to the Navy; polite, witty, intelligent, fascinating and utterly impartial in their political commentary.

As MPs we get offered an opportunity to learn more about the military by joining a scheme which allows us to serve time with which ever force we choose. I opted out this year, but having spent the evening with such nice but totally dedicated service men and women, I am seriously going to consider assigning myself to the Navy next year - I now want to know and learn more and witness the team and family at work.

Posted by Tracey Crouch at 22:20 No comments: 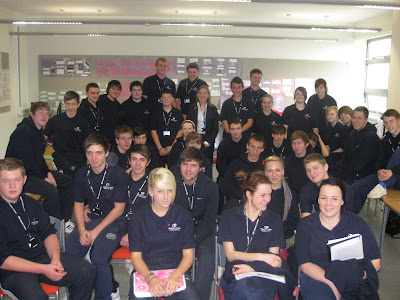 On Friday I went to meet this year's public services students at Mid Kent College. I've been on a number of occasions before and always enjoy talking to the gathered 17 and 18 year olds - they are like a mini-focus group. Once they've asked one or two of the prepared questions they very quickly go off script and end up providing an interesting insight into the issues that they care about. This time was no different and benefits, immigration and the cost of car insurance were the issues we spent most time talking about. We had shorter but still interesting chats about tuition fees, employment opportunities, EMA and the future of Chatham but the extensive discussion on welfare reform really gave me confidence that there was a genuine understanding why change is required. I look forward to going back next term to hear what the next group think about the key matters of the day but in the meantime I am in no doubt that the excellent students I met on Friday are going on to great things.
Posted by Tracey Crouch at 21:55 No comments: