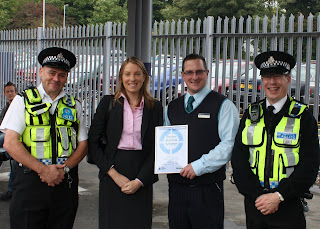 Yesterday, I went to Chatham Railway Station to present a Department for Transport and a British Transport Police award to staff for creating a safer and cleaner train station. In order to receive this award, the station must meet strict security criteria including reducing crime rates at the station, all staff are trained with conflict management skills, and that there is good station maintenance including CCTV, lighting, graffiti removal within 24 hours and secure fencing and boundaries.

I agreed to present this award because having stood outside Chatham train station during the election I met some of the staff who not only cleared up our election leaflets that people dropped without bothering to put them in the station bins but also saw them deal with some pretty hostile behaviour from members of the public. I was impressed by their attitude and their commitment to the local environment which they are responsible for.

However I am slightly bemused to see that my recognition of the hard work the low paid staff do to make sure that the Chatham train user is safe, has been interpreted as an endorsement of Southeastern! I fail to see how saying well done to the two transport police officers who stop a woman getting mugged or the man who follows smokers around with a dustpan and brush is any kind of acceptance of the pending fare increase or striking train drivers? As it happens the former is something that has been raised with Southeastern in person by both me, Mark Reckless and Rehman Chishti and Mark has organised a further meeting next week with the Rail Minister Theresa Villiers to discuss the impact of punitive fare increases.
Posted by Tracey Crouch at 14:53