A quick catch up

It was over a month since I last blogged so I thought I'd quickly recap on some of the things I have been up to. 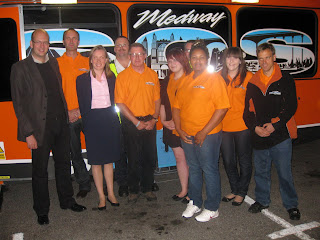 Just before I took some time off I went to see the amazing group of volunteers on the Medway SOS Bus. The Bus provides an excellent service to those who may have found that their good night out in the pubs and clubs has not quite gone to plan and are unwell, injured or simply feeling vulnerable and need some advice or help to get home. I was really impressed with the team on board, some of whom travel from as far as Ashford to help, and they clearly provide an essential service that can not only reduce the need for blue light services but can also prevent people needing to go to A&E. I had left before things hotted up but I understand that night they had 20 plus people needing their help.
My last engagement before the break was to attend the opening of the new Aylesford Football Pavilion with Ron "Chopper" Harris. What a great man and what an excellent new football club house. As someone who travels around the County with my girls team, I can say categorically it is by far the best facility I have seen in Kent.
I then took a two week staycation at home in Aylesford and my partner David and I caught up with friends, family, house administration and DIY - it was not our ideal holiday but it needed to be done!
Once back, the priority was to go through the post and emails that had accumulated in my absence. Thankfully my wonderful staff had dealt with most casework in my absence but there were a mountain of reports and papers to read when I returned to my desk in Westminster. Luckily I managed to get through them quite quickly before returning to the constituency for more meetings and an extra surgery.
One absolutely fascinating meeting I had was with a charity that is about to be entirely based in Aylesford called Computers4Africa. In this global age of technology where we can't move for things that bleep, that instant communication with people all over the world is a requirement not a luxury, and that new year 7s are told to have a laptop as required by their new secondary school, it is difficult to appreciate that our old desktop PCs are so enthusiastically received by many in Africa. Computers4Africa clean data from old PCs and send them to countries, such as Tanzania, where they are given to schools and communities to use. The best story I heard was that they were being donated to schools where people were being trained to become ICT teachers so they themselves then learn how to build a computer before going on to teach what they've learned. That is sustainability in action! Whilst I only had a preliminary meeting with the charity and am very much looking forward to seeing their warehouse where they clean the computers of data and prepare them for shipment. If anyone has a PC they would like to donate, their details are on their website and I know it will be gratefully received.
So now we are back in Parliament for two weeks before the Conference Season. Yesterday's debate on the Alternative Vote was certainly a feisty affair and although I voted in favour of the Bill at second reading, I have severe reservations about the date of the referendum (hence why signed the Early Day Motion). There were 74 people down to speak in yesterday's debate and not all got called. It will be interesting to see what happens at Committee Stage, where each clause gets discussed (in theory anyway), and how many people get a chance to speak in those debates.
Posted by Tracey Crouch at 10:53

Tracey it was a real pleasure to meet you. Thank you for your support and encouragement.
Sue.boxall@computers4africa.org.uk