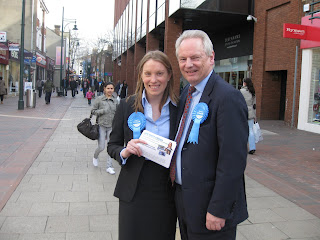 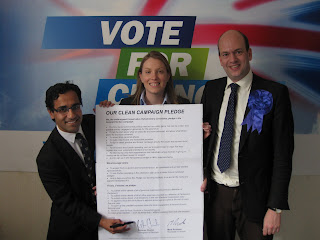 With the expenses scandal overshadowing British politics, it is important for candidates to try and restore voters’ trust and faith in politicians. So as the 2010 General Election begins, your local Conservative Candidate, Tracey Crouch, has signed a Clean Campaign Pledge providing voters with a clear personal commitment to behave responsibly and fairly during the forthcoming campaign period, and to uphold high standards if successfully elected to Westminster.

The Pledge covers 17 areas of professional and political conduct including key campaign commitments such as:

• To fight a clean, positive and honest campaign around the issues that concern local people

• To refrain from personal attacks

• To be honest about public spending, and not to scaremonger in ways that frighten the most vulnerable members of society

• To sign up to the transparency pledge on MPs’ expenses

"Voters are fed up with politicians treating them with little or no
respect. The only way to earn voters’ confidence is for politicians to
make, and keep, a promise to behave decently and honourably. So today I’m
making a personal and public commitment to run a clean campaign, free from dirty
tactics and personal attacks. People deserve politicians who will spend
their time getting the country back on its feet rather than scuttling around in
gutter politics"

The CLEAN CAMPAIN PLEDGE is below:

CLEAN CAMPAIGN PLEDGE
I, Tracey Crouch, the Conservative Parliamentary Candidate for Chatham and Aylesford, pledge in the General Election campaign:

To show by my actions that politics need not be a dirty game, but can be a clean and positive activity, engaged in genuinely for the good of all.

To refrain from personal attacks.

To make only honest and reasonable promises.

To fight a clean, positive and honest campaign around the issues that concern local people.

To be honest about public spending, and not to scaremonger in ways that may frighten the most vulnerable members of our society.

To take money only from organisations and individuals whose motives in giving money I do not have reason to suspect.

To sign up to the transparency pledge on MPs’ expenses below.

To expect from me decent and honest behaviour, as a candidate

To ask other Parties operating in this election to sign up to a similar honest campaign pledge.

To help me enforce this Pledge, by reporting truthfully to me and to the media any apparent breaches.

Finally, if elected, I pledge:

To publish online details of all of personal expenses incurred as a Member of Parliament.

To publish online details of all office expenses incurred as a Member of Parliament.

To publish online details of all donations in line with Electoral Commission rules.

To appoint a local firm of auditors to approve expenses accounts at the end of every financial year.

To open up the unedited expenses claims to local newspapers at the end of every financial year.

Never to claim for food, furniture or household goods.

To meet all tax liabilities – such as stamp duty – without claiming them from the taxpayer.

Conservative Candidate for Chatham and Aylesford