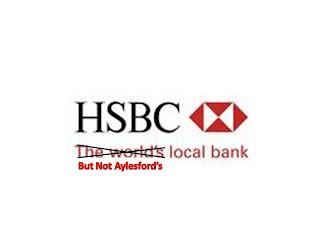 The bakery and deli are long gone. The Post Office went last year. Now Aylesford Village is about to see the closure of its HSBC branch much to the anger and disappointment of local residents. Already village business owners and residents, and those who travel from Eccles, Burham and Wouldham villages to use the branch, have protested outside the branch and got petitons signed. Last week I and other councillors from the Parishes and Borough wrote to the Chief Executive of HSBC urging him to reconsider closing the branch. The text of the letter is as follows:
"As the prospective Conservative MP for Chatham & Aylesford and the local councillors representing the communities most affected, we are very disappointed to learn that HSBC has decided to close its Aylesford Village branch.
The branch services a wide area including Aylesford itself, the surrounding remote villages of
Wouldham, Eccles and Burham and the Royal British Legion Village, a residential area run by the
legion for Second World War veterans and other ex-Armed Forces personnel. With no other bank branch nearby, it goes without saying that HSBC currently provides a vital service to residents and businesses in the local area and its closure will see a further decline in local village
life, an outcome that seems contrary to your big budget marketing campaign as the “local bank”.
We therefore urge you to reconsider your decision to close the Aylesford Village branch as soon as possible so that residents and businesses can continue with their financial matters without disruption".
Posted by Tracey Crouch at 11:15

I'm glad to see you are getting behind this issue. We were amazed to hear about the closure of one of the last remaining local service in Aylesford, which will inevitably weaken trade for other local businesses in the immediate area. I bank with HSBC & my husbands' Aylesford based business relies on the convenience, efficiency & personal service of the local Aylesford HSBC branch. We moved to the village c.7 years ago and fell in love with it's history, beauty, people and authentic village feel. What will be left if HSBC goes & potentially other businesses follow? Just a rat run for over-sized, excessively loud, fast vehicles, whose drivers have absolutely no appreciation for the quaint corner of England they are rampaging through! I know that the Banks decision is unlikely to be overturned but what can we do, as local Conservatives, to change the probable fate of our village, like so many other English villages lost to statistics?