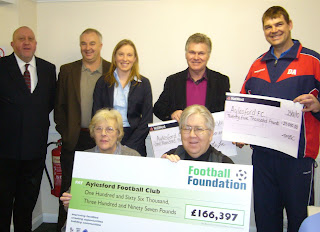 Local Conservatives were out in Snodland and Princes Park today but I started the day in Blue Bell Hill at a coffee morning, organised by local Conservatives, and open to the general public. It was an experimental way to meet people who want to meet me but who have not yet had me on their doorstep and it worked really well. In order to avoid claims of bribery during this long campaign period people paid an entry fee, which will be donated to the Kent Wildlife Trust, and in return they got a coffee, chocolate hobnob and a chin wag with me and the local councillors. The time flew by and I am sure it is something we will do again.

I then went on to a foundation ceremony at Aylesford Football Club. They have been given a significant amount of money from the FA, the Football Foundation and TMBC to build a new pavilion on land donated by the Parish Council. The Club will have new first class facilities for grassroots football, which is hugely important for the community. Arriving in my suit and saying a few impromptu words, it was definitely the smartest I have been at a football event for some time! Tomorrow I will be back in my shorts and boots!

I then joined the afternoon canvass team for a final hour of door knocking. Lots of "good lucks" today which is always nice.

And now I am back at home watching the Tottenham v Leeds FA cup match wondering why Harry Redknapp lets Defoe take penalties...
Posted by Tracey Crouch at 17:13