May we never forget 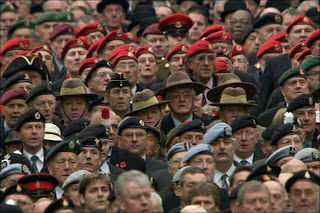 I went to two different but very moving Remembrance Services today. This morning I attended the Service at St Peter & St Paul Church where the vicar had invited a serving soldier to address the congregation. The soldier from the Royal Engineers spoke about his time in Iraq and Afghanistan and the loss of two soldiers in his regiment; he then took questions from the children attending the service which ranged from how high had he parachuted from through to did he think there would be a World War III. It was poignant how interested the young children were in him, his uniform and his medals - I saw a beautiful young girl staring in awe at him from her mum's lap and it reminded me of the photographs you see of youngsters looking up at World War II veterans and wondered if today's brave soldiers will be similarly respected in 50 years time.

This afternoon I attended the Service at the Royal British Legion Village. Sadly, there were fewer men marching this year but I was told later by Edwin Boorman, President of the local British Legion that there were 250 people at the ceremony. I sat next to some veterans who were shivering as they braved the cold wind in just their jackets with their medals proudly pinned to their chests. It was clear that this Remembrance Service meant more because many had fought in World War II and had lost friends and colleagues. You could hear their voices break when they repeated the words "we will never forget".

The sombre ceremony was broken by Squadron Leader Des Butters loudly asking everyone who returned from laying their wreath if they were going for a cup of tea after - Janet, who read a poem during the service, and I found this so surreal that we started to chuckle into our scarves and coats. Des, who wears hearing aids in both ears, was totally oblivious to what he had started.
Posted by Tracey Crouch at 18:24