The Aylesford Youth Club is going from strength to strength and last night was a demonstration of how successful it has become. Thanks to the hard work of the volunteers and the generosity of Buckmore Park Kart Club, 32 youngsters enjoyed a go-karting session and the internationally successful Kart track. Both Lewis Hamilton and Jenson Button won competitions at the track owned by motor racing legend John Surtees and I think many of the youngsters, both boys and girls, were wondering after if they were going to be a future Formula 1 champion!
It wasn't only the kids that enjoyed it! Having been told I was too old to race in a kids kart (which I am!) I thought I was only going to get to sit and watch the fun. But (thankfully for me) one of the 16 year old lads was too big for the kart and since he was old enough to go in an adult kart we both got to have a whizz around the track. It was the fastest 10 minutes ever and Tom, my opponent, managed to save face in front of his mates by not losing to a woman - albeit due to some pretty hilarious cheating...!!! I have raced around Silverstone in an E-type jag before but this was much harder and certainly more raw. In a car you feel safer (for starters you are strapped in) and you know if you crash, roll, spin etc there is at least some metal between you and the track. The kart is open, heavy and fast and very very close to the ground. But in the words of some of the kids last night - it was awesome.
To add to the excitement, whilst we were there Buckmore Park Kart Club received notification that it had been awarded third in the whole of the UK in the Motor Sports Association Club of the Year Award. This is wonderful recognition for a club that does so much to promote participation by younger members and has a relationship with Mid Kent College as part of the Lets Go Karting initiative. The Club does a lot to ensure that people who cannot ordinarily afford to participate in motor sports can access schemes in order to open up new avenues to them. The Club also does a lot to help improve literacy and numeracy through schemes as well as teaches vocational skills to some youngsters. My congratulations go to the Club for this well deserved award. 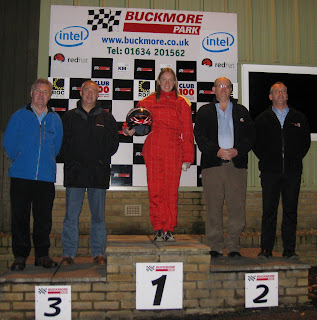 Tracey Crouch is The Stig!

tom didnt mean to cheat, he just got carried away!

The Club does a lot to ensure that people who cannot ordinarily afford to participate in motor sports can access schemes in order to open up new avenues to them.