After a few meetings regarding Meridian Girls, I joined Conservative colleagues at the annual Kites over Capstone event. We managed to get over a hundred more signatures for our petition against plans to build on Capstone Valley as well as marvel at some spectacular kites, including these two giant lizards! 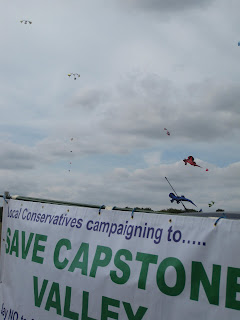 After a couple of hours at Kites, we headed to Aylesford for a barbecue arranged at very short notice to celebrate Tashi Bhutia's victory in the Luton & Wayfield by-election on Thursday. After the team's efforts over the past month plus the delivery of a ward-wide thank you letter yesterday, everyone was enjoying sitting down with their burgers and a glass of wine. Tashi made a lovely thank you speech and gave Andrew, his campaign director a beautiful Khukuri sword as a token of his appreciation. As soon as the raffle had finished everyone came to have a look not least because its intricate carvings are stunning. 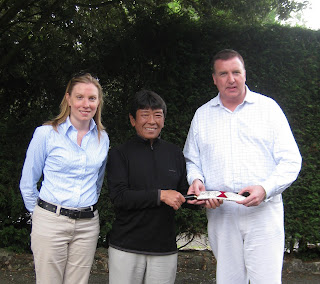 It was obviously a real honour to be given such a gift and Andrew was momentarily speechless - however, I think the next campaign he runs people will think twice about refusing to go out delivering leaflets in the pouring rain!! Anyway it was a wonderful event and one that Tashi, Andrew and the team thoroughly deserved.