Quick - a Tory in the Stocks!! 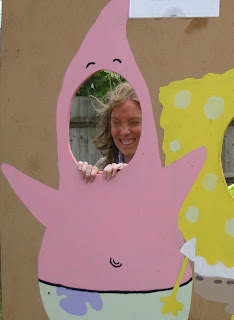 Having spent the morning with my nephews and niece, I popped along to Abbeyfield in St Martin's Square, Larkfield for their summer fete/fun day. The Mayor of Tonbridge & Malling, Cllr Sue Murray opened the event and thankfully during the time we were both there not a drop of rain fell! I had a quick go in the stocks - although to be honest, I wimped out and ducked every time a sponge came any where near me! The young man in the stocks with me (annoyingly I forgot to ask his parents if I could post his picture on my blog) was far braver/crazier than me and got hit by one or two sponges but just laughed and waited for the next one! 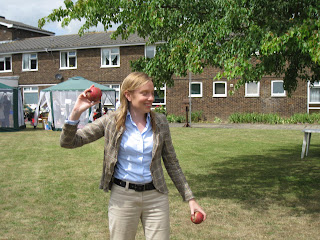 After the stocks, I moved on to the coconut shy and despite having my eyes closed in the picture actually managed to hit one!! Since I don't have a clue what to do with a coconut I let them keep it! Then I moved to the penalty shoot out - 3 shots for 50p - and this time, having scored a goal, I kept my prize of a packet of Haribo sweets. Back inside I bought two hardback books for 50p - one on Disraeli and one on the Royal Family written by Jeremy Paxman. It was a great little fun day and I hope the weather held off for the rest of the afternoon.
UPDATE: I have been contacted by Jamie's mum and I can publish his picture so here is one of the brave little lad preparing to take a sponge in the face for a good cause. Well done Jamie! 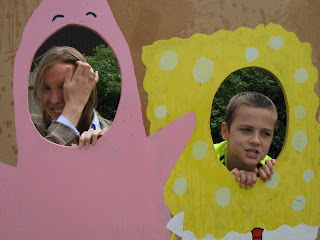 The boy in the stocks with you was my 9 year old son Jamie Andrews (yes he is crazy most of the time) and had a great time at the fete as did most people from the feedback I gained. Thanks again for your support - the weather stayed fine all afternoon although I don't think everyone stayed dry!. Lesley Andrews (Care Co-ordinator Abbeyfield St Martins)