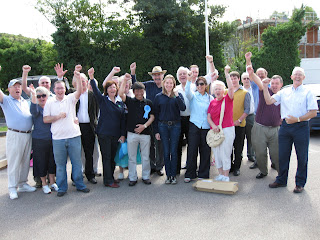 We had a massive team out today for the launch of Tashi Bhutia's local election campaign in Luton & Wayfield. A by-election has been called for 3rd September after it was revealed that Dennis McFarlane was under investigation for "irregular benefit claims". Tashi, who was in the Brigade of Gurkhas, was selected by the Chatham & Aylesford Conservative Association on Wednesday to be their candidate and today we went out in force to let local residents know that it is time for a change. 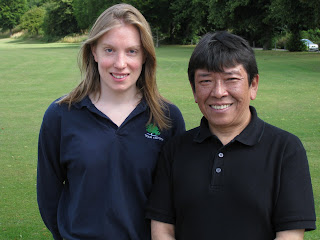 Most of the team were delivering Tashi's introductory letter but I joined Tashi on the doorsteps canvassing. Out of a whole morning of canvassing we only found one person who said they were a solid Labour voter. There were a number of people who had previously voted Labour who were highly unlikely to do so again and some were very clear as to why - they don't like Gordon Brown, they are fed up with uncontrolled immigration, they were finding things difficult financially, and they certainly didn't like the way Labour treated the Gurkhas!
The message on the doorsteps this morning was clear - people felt let down and want a change. We are going to campaign hard to bring change to Luton & Wayfield locally, and then we are going to campaign hard to bring change nationally by winning Chatham & Aylesford at the next General Election.
Posted by Tracey Crouch at 19:01

It was a great exercise today, and I am pleased to read your "doorstep feedback" summary. It's what I find too.

Luton and Wayfield ward has, frankly, got itself bogged down with an awful lot of Labour manipulation to keep it down, as with all Labour's "state clientèle" areas, both here in Medway and elsewhere in the country.

It's time to change that, as urban Strood has already done, and without falling into the trap of going off in another direction.

Rainham learned that lesson and all their former Lib Dem representation has now become solidly Conservative.

To any readers here from Luton or Wayfield I say: let Tashi be your conduit to making that vital change for your area, just as others before you have already made that move.

If even Weeds Wood now has a (very good indeed!) Conservative Councillor, then why shouldn't you be able to have one as well?

As the Terminator would say (in Judgement Day): "I would!"