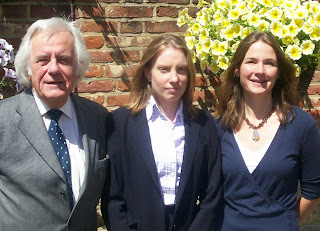 Well what a day! It was a long count due to the separation and verification of the European ballot papers but we eventually got the results of Malling Rural North East, Malling Central and Malling North around 2.30 today.
Firstly Peter Homewood overturned the Liberal Democrats and won Malling Rural North East with a majority of 2000 exactly. This was an absolutely fantastic result for residents of Burham, Eccles, Wouldham, Ditton, Blue Bell Hill, Aylesford and the TMBC parts of Walderslade. Peter will be a fantastic County Councillor and I am delighted that all our hard work on his campaign over the past few months really feels like it has paid off. Labour were beaten into fourth behind the English Democrats and very nearly came last after the Green Party by just a few votes.
Sarah Hohler held Malling North but unfortunately despite nearly halving Trudy Dean's majority in Malling Central, Alice Hohler was less successful. However I was really pleased to see that the Larkfield Conservative vote, the only part of Malling Central within my parliamentary constituency, was very healthy indeed and hopefully reflects the amount of community and issues based work we have done in the area. Alice fought a great campaign and worked very hard, and although it might not feel like it at the moment, she did a fantastic job.
Across Kent it seems the Labour Party have had a dreadful time losing both the Group Leader and Deputy Leader and at the time of writing only one Labour Councillor has retained their seat... You can follow what's going on, or look back at what has happened HERE.

Congratulations - are you going to make education a priority? If so perhaps you can teach people to spell "Election" correctly.