Chatting about Chatham with George 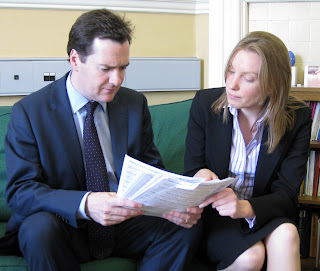 Last night a team of 9 of us did some telephone canvassing of my current credit crisis survey. We spoke to a huge number of people between 6.30 and 8pm from all over the constituency to get their feedback on how people are feeling about the current economic conditions. As I mentioned previously it is a difficult survey to do because so many people have been affected by the downturn. I have found people are very willing to talk about their experiences with this survey and so it was great to have an opportunity to go through the surveys today with Shadow Chancellor George Osborne. Despite it being a hectic week and further hidden facts about the Budget coming to the surface throughout the morning, George spent a lot of time looking through the surveys digesting some of the responses.

One thing the survey clearly shows is that the personal impact of the credit crisis, regardless of age, family status or profession, is significant and that many people are cutting back on spending or are deeply worried about the immediate future. I got the impression on the phone last night that people were not fooled by the Budget and if anything resent politicians trying to pull the wool over their eyes about how much the ordinary taxpayer is going to have to pay to get the country out of this mess. It has hardly gone unnoticed that petrol prices are creeping up again and even the cheaper stations don't feel that cheap anymore!

Of course, if the Conservatives had given this Budget, we would have got a grip on government spending and used the savings to introduce real help now for families and pensioners such as

I think most people are realising that yet again, as with every previous Labour Government, the Conservatives will tackle Labour's debt crisis and deliver economic change for Britain.