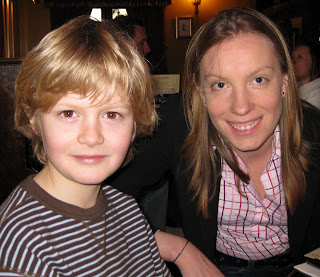 We had a huge team out today in Ditton and managed to knock on 600 doors, almost 900 people, in two and half hours. The response today was absolutely fantastic with well over 75% of those who were in pledging their support. And I think what surprised me most was how strong the support was - one lady told me that if she saw Gordon Brown walking down the street she'd lynch him!

More than one talked about the huge debt that the Government was clocking up and that they were genuinely worried about what state the country would be left in - I can't help but share their concern. I have wanted to be an MP for over 15 years and now being on the cusp of achieving that ambition it is truly frightening what mess a possible Conservative Government will inherit. But then history suggests that it is always the case - every previous Conservative Government has had to pick the country up from its knees after Labour has left power.

Anyway half way through our session this morning I suddenly got major deja vu! We knocked on the same street that two years ago I met an angry wasp and two men in their underpants - I pointed out to our man with the clipboard the houses and refused to go and knock again out of sheer embarrassment!! Today there were no wasps or underpants - just a few people in their pyjamas, carrying awesome amounts of shopping or walking some gorgeous dogs. Plus as part of our bid to start them young, we had our newest and youngest helper Freddie out helping - he thoroughly deserved his chips at lunchtime, but then I think we all did!
Posted by Tracey Crouch at 18:42