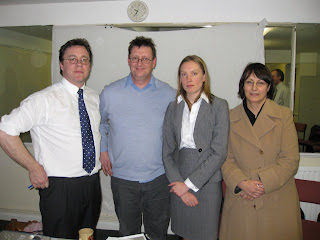 A large number of residents attended last week's Aylesford Parish Council and demanded answers on protection measures being taken in the village following the recent floods in Bush Row. I wasn't at the Parish Council but a number of residents asked if I could do anything following the meeting and so I contacted the Environment Agency and asked if they would come and meet local residents to explain what is being done to prevent future flooding in the village. The meeting took place at the community centre tonight and around 40 local residents attended to listen to, and question representatives from the Environment Agency, TMBC and also the National Flood Forum.

It was clear from the meeting that communication has in the past been very poor and that this has to be a priority going forward. I and many of the residents learned a huge amount about what the EA has been doing and what it intends to do to ensure that villagers are defended from future flooding which, although can't turn back time for those who have already been flooded, may alleviate the issue going forward.

The EA have promised to regularly communicate with the village, upscale its efforts on maintenance and apply for investment in some sort of defence/protection scheme dependent on the outcome of a feasibility study. In return the residents have formed an action group which will, I hope with my help, draw up a flood plan to ensure that proper communication, contingency and resilience measures are in place so that next time we get half a months rain in a couple of hours villagers not only know what they are supposed to do but are ready to do it.
Posted by Tracey Crouch at 23:15