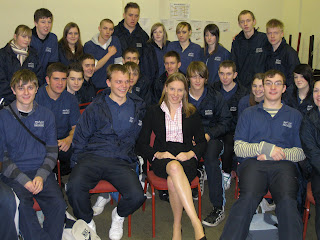 I have had one of those great days as a candidate where you feel a bit like an MP already. I started today by speaking to students at Mid Kent College. This is the third time I have been along to see the public service students and they were a great bunch. My opponent went to speak to the same students a couple of weeks ago and so I think they were a bit surprised when a woman in her early thirties with a Kent accent and a normal background/life walked in as the Conservative candidate. I only spent a few minutes talking about how you become a candidate before we went into questions and so I knew that I had done OK when we started to run late and many students still had questions. And to be fair they were asking some excellent questions ranging from what is the Conservative Party going to do about police, fire services, immigration through to the support we give to our troops, bus fares and community facilities for youngsters. We had a couple of photos taken at the end but I wanted to post this one above because the lad in the front row had me in stitches when he did one of those fake yawns in order to put his arm around the back of my chair that you usually only see in teen movies.

After leaving Mid Kent College I went to Bridgewood Manor Hotel for a meeting with the Shadow Health Secretary Andrew Lansley and local GPs and Dentists. The meeting started with a very interesting conversation about NHS Dentistry and ended an hour later on GP Commissioning. The meeting came about after my local survey raised some interesting issues and we managed to discuss some of them, such as availability of NHS dentists and after-hours care, directly with the practitioners.

Following the meeting with the doctors and dentists we headed up to the Medway Maritime. We were due to arrive at 2.45 and left with plenty of time to spare - however what we hadn't calculated for was our arrival coinciding with visiting time so we ended up getting stuck in traffic and being late! The Chairman came and met Andrew in the car and so he managed to have half the meeting in the jam before eventually arriving for the tour of Kingfisher Ward. We then had almost an hour with some of the hospital directors which gave us a fascinating insight into some of the issues the hospital faces and what needs to be done about them. Finally Andrew was whisked down to the Hospital Radio studio where he did an interview for BBC Radio Kent, KMFM, the Kent Messenger and of course the Hospital Radio. Although the whole afternoon over-ran I think we both found it incredibly useful.
Once Andrew was safely en route back to London I headed down to Aylesford for a campaign meeting followed by my Association's Executive meeting. Tomorrow is slightly less busy - I am picking up the keys to my new house in Aylesford, before heading down to Folkestone to put some flowers on my gran's grave, see my Dad and his mad Labradors and then having a coffee with Michael Howard...

Coo! And all I did was go to our Ward Branch AGM just a little way down Maidstone Road from the Bridgewood Manor.

My "five minutes of fame" at that event was reading out an address from the Association Chairman, who couldn't be there in person.

I have to admit that I don't watch "teen movies" so hadn't seen this fake yawn. Perhaps I should broaden my movie range…