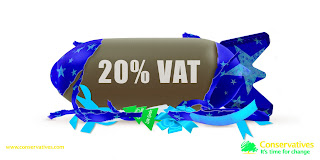 I promised earlier on in the week that I would post more about the general public's reaction to Pre-Budget Report, but in a way it almost feels unnecessary. There has been so much negative comment in the papers that it hardly seems worth reporting that almost everyone I have spoken to thinks it was all spin and no substance.

Those that work in shops were telling me that people are walking into their shops, looking around and then walking back out again - this reminds me of a report I saw on the BBC news of lots of people in a shopping centre but hardly anyone carrying bags. If people are worried about their jobs - which they genuinely are - then it is hardly a surprise that they are not making frivolous purchases.

The temporary VAT cut appears not to have fooled people into thinking they have more money in their pockets and most now know that it could go up as a high as 20%. I am not sure I have met one person who thinks they are going to be better off in the long term because everyone knows that with all the debt building up we are going to have to pay it off somehow and sometime soon.

And if the sceptical reaction to the PBR wasn't enough, the arrest of my former boss Damian Green has caused total consternation - especially amongst those I was talking to in Snodland this afternoon. Damian received and revealed information that 5000 illegal immigrants were working in the UK...and promptly got arrested for it. Everyone I spoke to think that he was doing this country a service, not committing a crime and the running joke now is to say "ssh, they are listening..." every time someone talks about Damian. It is ridiculous but sadly not untypical of the Big Brother Government we currently have. The sooner the election is called, the better.

The annoying thing about all this is that far too many of the public-at-large are still being taken in by Brown and Darling, as recent opinion polls (three in the last few days) have shown.

Not only has the headline result (voting intention) been much closer between the two main parties in these and others, but answers to the specific question of whom people trusted more on the economy and on getting us out of the recession have not been good for the Conservatives.

The latest of these (in today's Daily Mirror, done by Ipsos-MORI) shows 41% say "Brown/Darling", only 29% say "Cameron/Osborne".

This needs to be addressed very seriously and urgently by Party HQ and the Shadow Front Benchers. This credibility gap is a ridiculous example of spin over substance and must not go unchallenged.