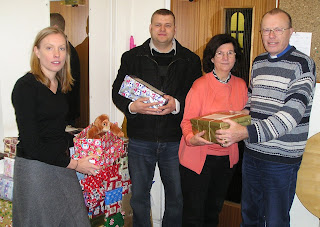 It is only November and I hate to use the C word so early on in the year, but today I did my small bit for the Christmas appeal being run by the The Church of Christ the King in Princes Park.

The annual shoebox appeal, organised by Blythswood Care, sends thousands of donated shoe boxes filled with gifts to people around the world who are less fortunate then ourselves. Since 1993, the scheme has delivered over 500,000 boxes to countries such as India, Romania and Albania.

I took two boxes along, one for a girl and one for a boy. It is amazing that a few small items like colouring pens, a teddy, a skipping rope and a packet of marbles - as well as some haribo - will bring such huge joy to someone somewhere. And I am told that often our shoe boxes are the only presents that a child might receive. Wrapping a shoebox is harder than you might think but the thought that on Christmas Day a boy and girl in a country far worse off than ours is opening up a few gifts from me makes it all worth it.
Posted by Tracey Crouch at 18:49