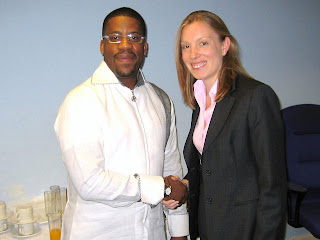 I joined others this morning at the Better Life Assembly in Chatham High Street for the celebration of Cultural Day and I had a great time. There was so much energy and enthusiasm in the room that you couldn't help but join in singing and clapping with everyone else. I had been asked to speak on how do we achieve cultural cohesion. I only had 5 minutes but this is what I said:

Can I begin by saying how honoured I am to have been asked to join you today. I didn’t hesitate to accept your invitation and have been looking forward to the service ever since.

You invited me to speak about cultural cohesion and how it can be achieved. But I see much of the answer right here in front of me. Your excellent website speaks of the Better Life Assembly as an independent, non-denominational, multi-ethnic church. You are already the embodiment of cultural cohesion bound by a firm belief that the Scriptures are the inspired word of God. Christianity has played and will continue to play a huge role in creating cultural cohesion.

The Church of England enjoyed a monopoly in its early history and we had laws restricting the rights and freedoms of Roman Catholics, Jews and even Protestant dissenters. Out of the struggle of those years came the principle of tolerance and religious freedom under the rule of law. A principle that I believe is one of our country’s greatest gifts to the world.

And thank goodness because British society today is a mosaic of many nationalities and faith communities. What should give our diversity strength is an acceptance and tolerance of each other’s differences. Every time you open a national newspaper you see that many Countries remain violently divided by race or religion. We are not violently divided but nor have we yet achieved true cohesion.

The church does play an important role in our community. And in many respects you are often better placed to deliver cohesion than us politicians. Your vision – life satisfaction, spiritual growth and community enhancement – to which I subscribe to wholeheartedly - gives us a purpose for cohesion but what is the solution?

Well I fundamentally believe that the solution to cultural cohesion is to be found locally. It is about people learning to live alongside each other in their local neighbourhoods, accepting each other for who they are not what they look or sound like. It is about local councils who are closer to their communities knowing their area best and understanding what might work and what won’t work.

I lived for a few years in Brixton in South London. There are projects I have seen run in black communities in South London that would not work here in Medway. There are problems within those communities that are not prevalent here. Local government should change from being the agent of centrally dictated services, and instead become the enabler of local solutions. It is not about central Government dictating to diverse communities on how to behave, how to work together, and who with. The State should not be a substitute for the community.

I also believe that the education system has a key role to play. The Conservative party is very much in favour of faith schools – and has already committed to supporting the expansion of faith schools not least because of the contribution they make to tolerance in society. In addition policies have been and continue to be announced which support and strengthen the family unit which we believe is another fundamental aspect of cohesion. The value of a good education system and a good family unit should not be underestimated and are two areas that my party puts a lot of emphasis on. There is a lot of policy work being undertaken which aims to fix the physical and spiritual breakdown of society that has been caused by an increasingly relaxed attitude towards violence, drinking and gambling. If we can fix these then we are well on our way back to a better society.

I have been asked to only speak for 5 minutes so time is running short but I wanted to finish with one final thought. My company operates in 25 countries and employs over 50,000 people worldwide. Despite the differences in time, language, race, or expertise we are all joined together by one employee promise. That promise is “I am recognised for who I am and what I contribute”.

For true cohesion to be achieved in our family, our community and our country, we should all aim to be recognised for who we are and what we contribute and we should recognise everyone else for who they are and what they contribute. And for exactly that reason I thank you for this opportunity to meet with you and explore our shared hopes for the future.


Every week the Assembly hosts a lunch of traditional foods and this week it was Zambian food so I joined other members of the congregation for some hot food. I think they were slightly surprised that I insisted on having a taster of everything and apart from one side dish, which practically blew my head off, I cleaned my plate. I shall definitely be going back!