This morning I emailed the following letter to the Highways Agency Minister, Tom Harris on proposed improvements to the noise barriers on the M20:

I am writing to you as the Minister with responsibility for the Highways Agency. On 1st September, the Highways Agency will begin work on the noise barrier between Junctions 4 and 5 of the M20 – which bypasses the historic village of Aylesford in Kent. Whilst long term improvements on the barriers are welcome, and local residents have suffered from noise and air pollution for some time, there are severe concerns about the measures which, given the timetable for, require your urgent attention.

The programme of work begins with the removal of trees that have been in place between the Motorway and the housing estates for over 30 years. The trees cover a bank stretching nearly half a mile along the M20 and are around 8 to 9 meters tall. Their height not only helps absorb sound but also a black dust residue resulting from the sheer volume of UK and continental Europe traffic using one of the busiest stretches of motorway in the UK. The proposed new barrier will be 4 meters in height and the closest point is only 2 meters from residential properties. Furthermore there will be no replanting of trees. Despite this major change to the noise barriers which will affect over five hundred local residents as well as potential further noise disruption to the local secondary and primary school following previous improvement works, no consultation has been held about their removal with local residents or the local authority. Local councillors were only made aware of the proposed work a few days ago and only a handful of affected residents have received any communication from the Highways Agency. It is extraordinary that local residents have been denied the opportunity to consider and comment on the proposals, which demonstrates the arrogance and incompetence of this Government Agency under your command.

Please could you contact the Highways Agency, as a matter of urgency, and request that they put the work on hold until they have fully consulted with local residents about their proposals.

UPDATE: The work has now been postponed until further consultation with local residents - common sense at last.
Posted by Tracey Crouch at 15:49 No comments:

Once again, local Conservatives organised a stall at the annual Kites over Capstone weekend to raise awareness of the application to build 9,000 houses in the valley and to collect signatures on our petition to save the valley for future generations.
Nearly 15,000 residents have now signed the petition and the determination to save one of Medway's remaining open spaces is as strong as ever.
Last year the day was a complete wash-out with torrential rain leading to the cancellation of activities... 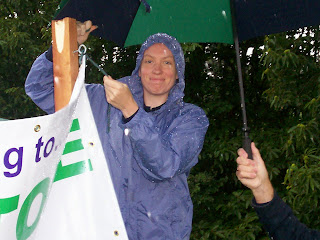 This year, however, the sun shone and over 1,000 additional names were added to the petition. 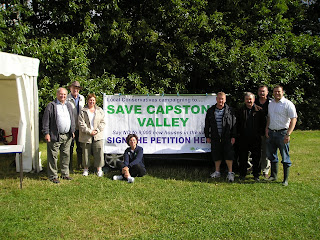 My thanks go to local councillors David Wildey (who co-ordinated the weekend's campaign) along with Alan Jarrett, Pat Gulvin, David Brake, Matt Bright, Adrian Gulvin and Denise Wildey who assisted on the stall.
You can still sign the online version of the petition HERE
Posted by Tracey Crouch at 17:26 No comments: